The inspiration to create Nautilus S.A. was brought about by two individuals who have had a love for the sea and sailing since childhood.  Their vision was to create a shop that would be a haven for any seafarer and thus in 1993 their first shop selling maritime equipment and products for boats was opened in Kalamaria, Thessaloniki, near Aretsou Marina.  This venue could easily compete with similarly large retail shops abroad and was something that was missing from the Greek market at the time.  Since then the company has mushroomed from one shop to many in key Maritime points throughout Greece.

In 1998, the company expanded to Athens when it opened its second shop in the Marina of Alimos, of which is now a multi-floored retail shop of 1000 square meters,  on Poseidonos Avenue.  The shop is situated right across from the marina.  Since then and till 2018 the company had opened four new branches – those being:

The growth of this sales network, in combination with the exclusive representation of some of the best known maritime brands in the yachting  market proved that the company could not only develop further but also have a competitive advantage in relation to other companies in the maritime market.

In the winter of 2015 the company entered into exclusive cooperation with the shipyard, Planaco A.E. in Aigina opening a new franchise in this area, providing service to ships that were being repaired and/or serviced there.

A milestone in the company’s history was in 2017  when it spread its wings into new markets creating  a subsidiary company, Nautilus Maritime LTD in Lemeso Cyprus which met the needs of the developing market at that time.

What should be noted as an achievement over the years is the company’s success in maintaining exclusive representation of large and well-known companies such as: LEWMAR, RAYMARINE, YACHTICON, RUTGERSON, NAUTEND, LIROS, HENRI LLOYD ,SPINLOCK , WHISPERPOWER, IMRAY ,AQUASIGNAL ,OCEANLED , DOMETIC ,GUIDI – of which it has maintained long-term cooperation with and continues to promote their products in the Greek market. These business partnerships have allowed the company to expand into new retail branches such as MEGA YACHT and CHARTER which have been added to our wholesale and retail departments. In order to successfully meet the needs of the company itself as well as its customers  a new logistics center had been created and put into operation in Renti.

In the framework of continuous growth, while trying to meet the ever-increasing needs of our customers our company in recent years has made great investments in software as well as in our IT departments in general allowing us to increase in productivity and efficiency. Parallel to this we have modernized our e-shop, through which our customers can obtain any equipment or parts easily regardless of where they are located.  Nautilus S.A. has also achieved  ISO 9001 certification, in order to ensure not only the best , but also the strongest service channels for our customers.

The philosophy and purpose of our shareholders is that Nautilus S.A. be a benchmark  in the modern yachting market. We aim to expand in this specific market as a retailer who respects the values and needs of its customers with a goal to improve our competitive standing through a high level of service and products.

products, in combination with its modernized shops. The knowledge  and experience the company has gained over the years  pertaining to its customers’ needs , has as a conclusion ensured its future development and expansion.

Lastly,  aim of our shareholders is for our company to function as a leader in our chosen markets. For this reason Nautilus S.A has built, over the years, suitable infrastructure comprising of experienced and expertly-trained staff in all its departments. 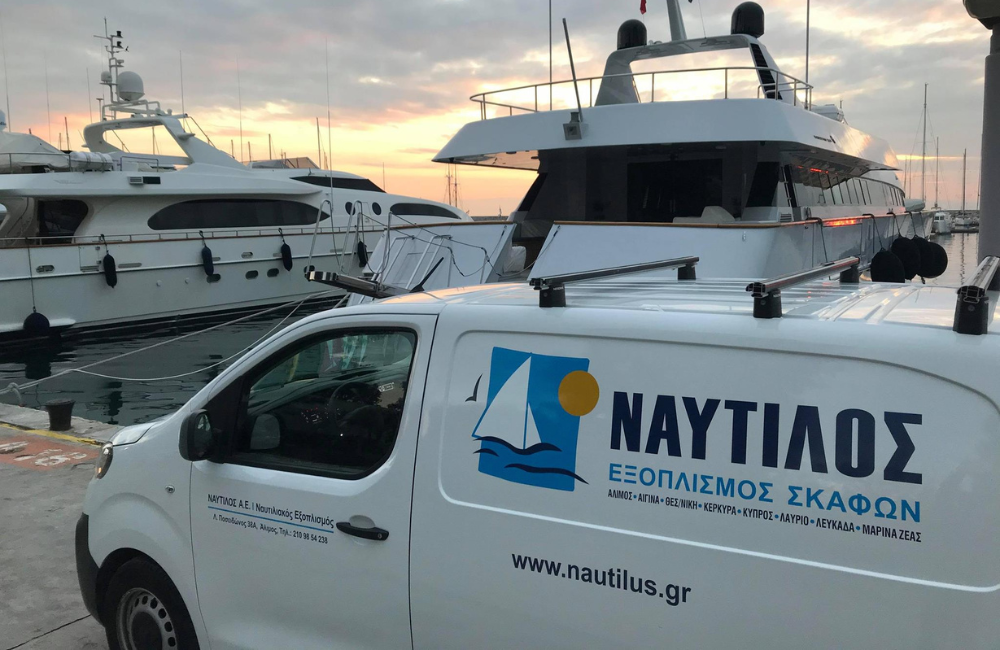 Choose Nautilus
NAUTILUS S.A. started its activity in 1993 by opening its first store in Thessaloniki, Aretsou above the EOT marina. In late 1998 he took the first step of its establishment in the greater Athens region with a base in Alimos, next to the homonymous marina. In 2008 Nautilus continued with the opening of the third NAUTILUS store in the Coast Moutsopoulou of Piraeus. In 2011 the company absorbed a pre-existing store of Lavrion and moved it to the olympic marine marina, thus creating the fourth owned store. In 2012 began an exclusive collaboration in Corfu with the creation of the Nautilus Corfu in Kontokali, near the marina of Gouvia. In 2013 we made a double movement: 1) We created the fifth owned store and sixth in total in Lefkas island, next to the homonymous marina and 2) we moved the Alimos shop to the Av. Poseidonos in our multi-storey facilities of total area 1000 sqm. This winter (2015) we start an exclusive partnership with the planaco SA store, in the homonymous yard of Aegina. So today NAUTILUS can be addressed to the honorable clientele through a total of seven stores in critical yachting points in Greece.
MORE >

Free shipping For orders over 69 € and up to 3kg

Easily locate & track the progress of your order

Be the first to know about offers, new arrivals & everything you need for Yacht Equipment